The #MeToo movement, the 19th-century designer Emilie Flöge and the water stewardship council of Australia may seem to be unlikely inspirations for a fashion show but these are all part of the backstory for Bianca Spender’s latest collection.

On Monday the designer launched her resort collection at Australian fashion week. In a show staged in a cavernous warehouse with bare-brick walls, she sent a parade of young women down the runway in draped dresses, sculptural tops and tailored pants.

The collection was filled with glorious but unexpected combinations of mint green, terracotta, buttery yellow, royal blue and white, with a splash of fluoro orange. Even the most casual observer would have appreciated that the clothes looked both elegant and wearable.

She spent hours researching the Victorian dress reform movement, which brought about the abandonment of corsets, the push for women to wear pants in the mid 19th century, and the aesthetic dress movement, to which Flöge belonged. “[The aesthetics] were like it’s not beautiful to distort women’s bodies, why are we doing this?”

The dress-reform movement also shifted the emphasis of women’s clothes away from the waist and up to the shoulders – an idea that has changed Spender’s approach to design. “It’s really interesting when your anchor point changes, how you come about designing and what you’re allowed to hold off – for me, it’s a major shift.” 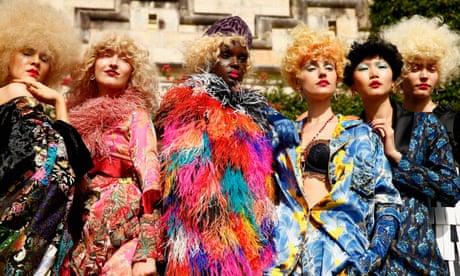 In her work, she’s also attempting to untangle some of the sustainability conundrums inherent in the fashion industry. The industry is one of the most polluting in the world and is often linked to worker exploitation, but Spender is looking for solutions.

“I think [being sustainable] means being careful and respectful. That sounds really simple but it’s really complex in a creative world to be careful with your resources, to be really respectful of every metre of fabric you use.”

In this collection, the fluoro orange, mint, butter and graphic blue print fabrics were all dead-stock fabrics. Using these fabrics makes her more creative: “I had to find ways to weave them in because they are so beautiful and compelling. There’s always a way to weave in something beautiful.”

She has worked with the same makers for many years, and her Australian-made clothes are accredited by Ethical Clothing Australia. She’s also working with a company that makes recycled polyesters and recycled fabrics, she has got rid of most of the plastic in her packaging and she has worked with The Social Outfit on a capsule collection made by refugee and new-migrant sewing technicians. Her next challenge is working with Water Stewardship Australia to look at the Chinese companies that make her silks, addressing how they can improve their water usage.

Spender also believes sustainability is about creating clothes that last and she says she has worn many of her own clothes for about 10 years. “[My collections are] always designed to not be out of fashion next season, so that is also intrinsic in it.”

She’s not alone in her push to increase fashion sustainability: other Australian high-end brands including Lee Matthews, Ginger & Smart, Arnsdorf and KitX are trying to improve things, while smaller ethical brands including Vege Threads, Pure Pods and Good Day Girl are breaking through. There’s also an industry push with initiatives including the Australian Circular Fashion conference, and online retailers including Well Made Clothes. 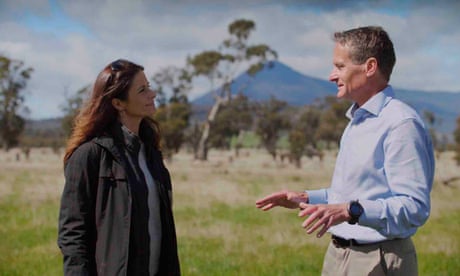 Livia Firth: It’s not realistic to think we’re going to be in a world without leather or wool

Spender believes change is happening: “Australians are compelled to be sustainable because we are connected to the environment in a way that you aren’t in big cities,” she says. “We’re a smaller size so we can be a bit more dynamic in how we manage it.”

But she knows there is much more to be done, individually and collectively. “I’m not going to solve it on my own, but I’m just trying to work with anyone who’s interested in working with it and look at all of these different layers to see what version I can do.”

… we have a small favour to ask. More people are reading the Guardian than ever but advertising revenues across the media are falling fast. And unlike many news organisations, we haven’t put up a paywall – we want to keep our journalism as open as we can. So you can see why we need to ask for your help. The Guardian’s independent, investigative journalism takes a lot of time, money and hard work to produce. But we do it because we believe our perspective matters – because it might well be your perspective, too.

Original Article posted by : The Guardian

Related Topics:designerVictorian dress
Up Next Everyone likes a bit of cool and fresh air. Is there any way to enjoy fresh air? There is no best way to explore the great outdoor activities than a jog. This is a typical form of workout helpful to maintain health and fitness. However, couponify.sg knows the ways to maximize the performance with Pedro discount code. Now, you can order best jogging, walking and other types of shoes. Pick correct trainers for multipurpose activities. A list of best running shoes is easy to find. However, buyers must focus on reviews and other feedbacks on these trending shoes. Here is what our experts recommend in this field.

This is the first brand that comes to mind when it is about sports reputation. The brand offers numerous series including the famous “Free Run.” These series are favorable to support the ankle and arches.

This is a perfect brand for people who live outside. Supportive footwear are the creative pieces by this logo. Its beautiful designs and creative features offer real comfort and support to the users. The shoes by Adidas are ideal for fashion as well as outdoor activities.

It is famous for the excellence and artistic work. Trainers by New Balance have excellent support and protection for the feet. Thanks to modern technologies incorporated in these shoes. These are supreme collections for more comfort and cutting-edge designs.

Pedro discount code is attractive for Asics lovers. This brand is for people who are ready to upgrade the skills. Wear the Asics shoes for new adventure and challenging task. It will let you cover the task without foot pain. The brand is mostly recommended by orthopedics to avoid the foot injuries.

It is an attractive brand for men and women. It is offering stylish and supportive collections since 1958. Don’t forget to see the “Nano” series if you are interested to enjoy lightweight cushioning, and woven textile upper.

It is an athletic brand helping people accelerating their running performance. This footwear provides quality cushioning with superb resistance. There are several trending Hoka styles to choose from.

Puma has a big name in the sports world. The shoes by this German brand maximize the performance while supporting the runners. The shoes are favorable for marathons and short-distanced races.

This is a quality running shoes recommended by several experts. The brand was launched in 2009 with a technology favorable for active people. It balances the weight while maximizing the stability. Is there anything else you need? Get the discounts with Pedro discount code on this quality running shoe.

This makes you perfect. The manufacturer understands foot structure and knows how to maintain the natural pose. This increases the performance without creating injury risks. This brand also improves the foot health and motion balance.

Get this brand if you love superior protection. It is famous for its 3D Hex Lugs technology. It offers soft cushioning with adaptive support. Enjoy the maximum stability and support while you run. Are you in search of a unique wholesale silver jewelry collection? Then, it’s time to pay close attention to this session, which will help you a lot before making a final purchase.

We Silver Jewelry are one of the leading manufacturers to deliver the finest quality jewelry based on customer needs and expectations at affordable prices. You probably know that jewelry across the world has been the sign of elegance and class since eternity. When it comes to offering wholesale silver jewelry, you have plenty of options because all are available in various designs, shapes, sizes, and patterns. We silver jewels provide a wide range of collections that are perfectly suited for your loved one, youngsters, working professionals, homemakers. It has been purchased for gifting reasons on numerous occasions and special events. The unique and contemporary designs give a stunning look and improve your personality.

Once you decide to buy 925 silver jewelry, always consider we silver jewels strive to manufacture silver jewelry with the ultimate finish and creative ingenuity. They bring a sense of beauty, elegance, and value to all jewelry pieces that make the one wearing it adorns a unique style and fashion like never before. The matchless silver jewels make worth buying, and they have vast ranges of silver ornaments. The making process helps to bring out the eye-catching silver jewelry without making the products too expensive as we consider the jewels to be worn on all occasions.

How different are we than other wholesale sterling silver suppliers?

With the evolving fashion trends, silver still remains as a perfect choice in jewelry. Recently, most people prefer silver over expensive metals because it offers versatility. If you buy silver jewelry online, it will make you beautiful and elegant on a wide range of occasions. We silver jewels focus on the comfort and satisfaction of the customers. Here some of the points are mentioned below for your consideration:

When you buy your silver jewelry from We Silver Jewels, you are getting a factory direct pricing with more discounts available for bulk purchase. When looking for wholesale jewelry supplies, the only thing you have to do is search by product or by the supplier. Now, you can find a supplier that you like, then check out their catalog and contact them for more information. Most importantly, wholesale jewelry is designed with the best quality materials to make your own jewelry, even run jewelry making classes. We Silver Jewels is the perfect place for you. Always offer excellent quality and a great range to make your jewelry collections unique.